We may have circumnavigated Iceland, but there is a lot of the interior still to explore. The most well-known route is the Golden Circle that does a big loop out from Reykjavik (so obviously there are heaps of tourists) We head off.


Our first destination is Pingvellir National Park. We are horrified to see Pay & Display signs. Later we discover that these have only been installed this year. We think there will be more to come.   We hike to Oxafoss waterfall then around the other side of the lake and wander through the rebuilt old buildings that were a part of Iceland’s Old Parliament (claimed to be the oldest in the world). As we head out we stop to see where they take tourists snorkelling or scuba diving between the 2 Continental plates! Didn’t look very exciting. Finally head north through the park to meet the route 550/The  Kaldidalur Corridor. This was previously closed, but now there are cars coming through so we “do” the drive between the mountains. Magic!  While it is fine we just keep driving with great views of Langjokull (a massive icecap). There is a side road up to the ice, so we head up. The track ends right at the icecap – pity we can’t drive on it!  We could camp up here, but decide to get to the end of the road before stopping – who knows what the weather will be like tomorrow. So finally find a spot in the riverbed of the Gieta River.


Yay, we wake to bright sunshine, so head off on a short detour to visit a lava tube cave at Surtshellir. The first cave is full of ice pinnacles. The second gets too much for me, so while John heads in I go overland to 3 of the huge sinkholes that are entries in to the cave.  Then back to our river & on to Husafell. Next stop is Barnafoss with water racing under its rocky bridge, & Hraunfossar with water running under the lava pillows & out to the river (look at the picture – it is amazing) Then a quick stop to meander through Storia, named for the historian Storri, with its old church, buildings & pool. On to Deildatunguhver to gawp at the hot water steaming out of vents – it is piped here & sent 74km to Borgarnes. It is also used as heating in loads of glasshouses so we buy some thermal grown tomatoes. Final stop for the day is at a tiny hotpot – a bit crowded and way too hot, before heading back through Pingvellir Nat Pak. Finally, we pull off the main road, & head up to the mountains for the night.


An early start to beat the tourists. First to Geyser (the original one) with its centre piece - the geyser called Stokkur. It goes off every 5 minutes, so we spend most of our time watching the show. Then on to the premier waterfall – Gullfoss (Golden waterfall) & here we do find the tourists. But it is a stunning sight with water falling at different angles. Then it is back to the Ring Road at Selfoss, before heading back over the mountains to our camp spot in Reykjavik – only this time there are a row of motorhomes there. How dare they!!! Copying us like that.


Today some maintenance work on GR2 before we head off to tackle the F roads – some of which are finally starting to open. And just in time too as we are booked on the ferry in one weeks’ time.  We are going to drive the 35 which runs north south, but first a quick stop to walk around Kenio crater with its blue lake before we reach the F part of the road. John lets air out of the tyres and we are on our way. As is often the case here the sun is shining late in the day….so on we drive between snowy peaks. We want to reach Hveravellir tonight to soak in the hot pools. And yes, we make it. A mere $5 each, and we soak for hours, get out and have dinner before soaking again, oh and chatting to a group of Poles It is nearly midnight by the time we head down the road & find a pull-out for the night – I don’t think any cars pass in the night!


We are now passing huge lakes – run off from the enormous glaciers we have been passing -before finally getting back to the Ring Road. Again, back to an Info Centre to see if any more roads have opened. We would really like to drive the roads to Laungafell, but they are still closed – so we will have to miss that one. But a few others have just opened today – so we will tackle some of these. On again – passing through Akureyri for a second time. We stop at the waterfront for lunch & John wanders down the wharf to look at a beautifully restored fishing boat. (The Askell Egilsson) They are starting whale watching tours today & are offering them at half price. Before we know it, we are on board for a 3-hr trip at an even lower price. And it is a glorious afternoon for a cruise – bonus of course is that we do see lots of whales. To end a lovely day, we find a pretty spot beside Lake Ljosavatn for the night.


It’s not long before we reach our turn off to F88. This is the Oskjuleid Route/Askja Way. It is an amazing drive. The road is merely a goat track that has just been graded & has numerous river crossings. It looks as if we are driving in a Sci fi movie set, all lunar landscapes, flat sand, ridged lava fields, snow-capped peaks, it just keeps changing.  Finally, we reach Askja & head up a smaller track to get to the walking track to Viti Crater.  It is a mere 2.5km each way, but feels a lot further trudging through thick snow. Hey, but it is worth it. The aqua blue, steaming lake looks amazing. Pity we can’t go do for a swim – the track in to the crater is still closed. Finally, off out of the Nat Pk to find a spot for the night, just past a bridge with a gate on it on the F910.


Wake to cold grey sky & a biting wind.  If anything, the road is more of a goat track than yesterday with very few vehicles. Sometimes you wonder where the road is as you come up over a scoria mound. Finally, we find the unmarked turnoff the park ranger told us about. Down a little track to our hot waterfall. Just awesome – sitting under a shower of hot water. By night-time there are quite a few of us camping here. In the morning, we return for another long soak, before heading back to the 910, which eventually becomes a tarsealed road as we reach a string of massive dams. We explore lots of side roads – well the ones that are open - all with great views of the Vatnajokull icecap & Mt Snaefell (the tallest mtn in Iceland) before reaching Laugarfell. There is another hotpot there, and as this will be the last one we will visit before we leave we decide to indulge in a few more hours soaking – this time with plenty of chatting too.  We end up camping surrounded by snowy mountains in every direction – and of course the sky is blue again late at night!


We have 2 days left. Not long enough to explore more F roads – so when we arrive at the Nat Park office we ask the very helpful lady what she recommends – she suggests Bakkagerdi. So, after indulging in an Icelandic buffet recommended in the LP we start heading in that direction. But after such a big lunch we need exercise, and there is a 5km return walk up hill to Henifoss. Another awesome waterfall, & it really does sound like a Boeing 747 taking off. Then finally on to Bakkagerdi where there is a bird watching platform to see puffins. Yes, I know we have seen them before, but really, we have arrived at the optimum time of the day to see them, so why not. We find a row of motorhomes at the carpark, so we simply stay there (with all the others) for the night. The puffins put on a good show – catching fish & generally showing off for the cameras that keep popping.


Our final day we decide to head over the mountains on our last F road. Great drive with some colourful ranges. Hardly another car. Heaps of snow – can see why it has only just opened. But then there is another range – the track is worse, steeper & ungraded. We admit defeat – it really isn’t worth it on our last day. Besides the mist is coming in. We turn and head out and on to Seydisfjordur where we are to catch the ferry to the Faroe Islands for a few days then on to Denmark. By now the rain has started & continues for hours. Pity as it really is a gorgeous old town. We celebrate with dinner out before heading to the large area where all the motorhomes are gathering. Tomorrow we catch the ferry & leave at 10.30am

Posted by Global Roamer at 8:07 AM No comments: 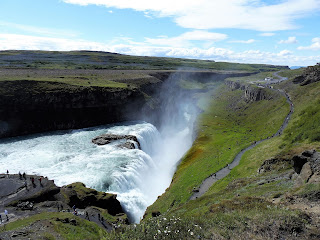 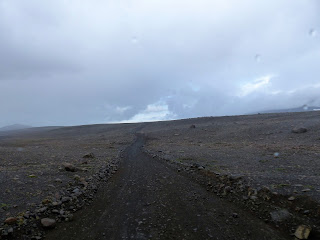 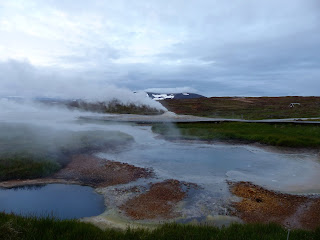 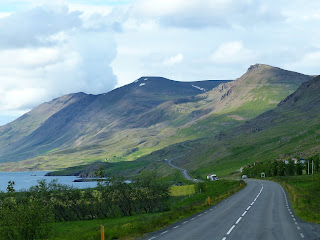 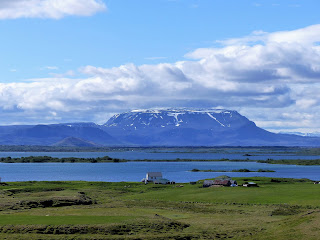 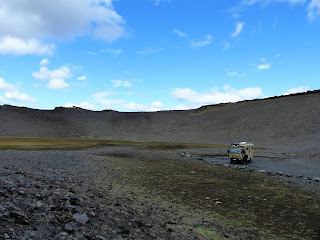 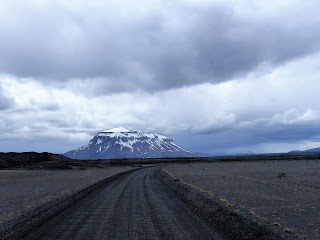 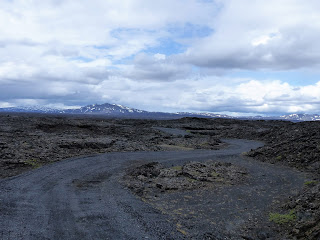 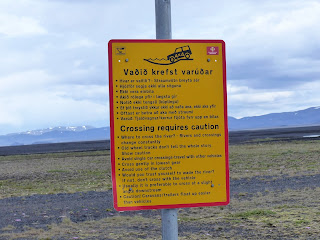 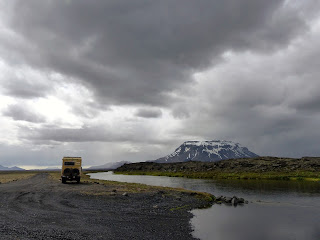 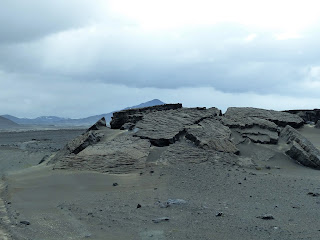 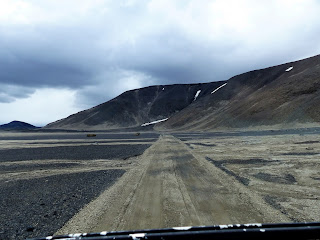 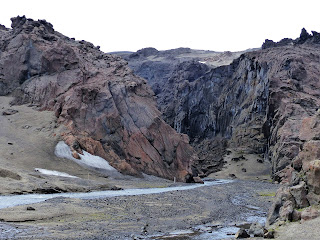 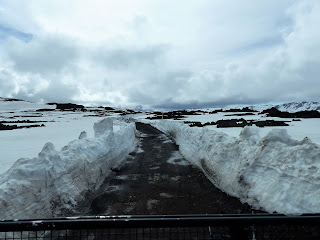 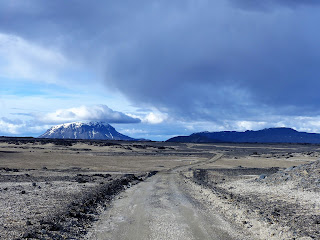 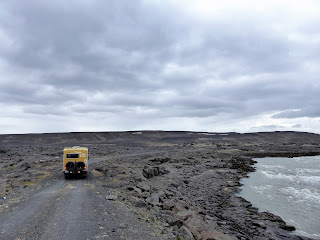 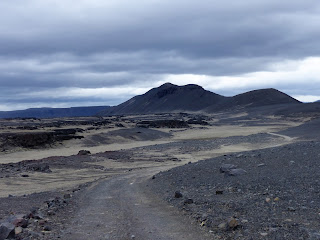 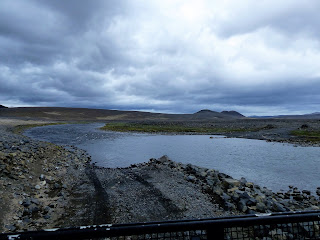 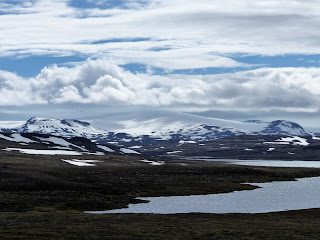 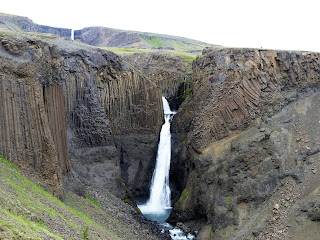 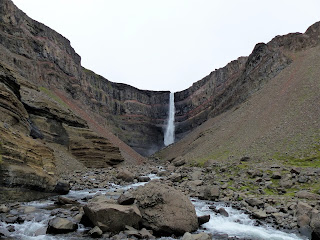 Posted by Global Roamer at 8:05 AM No comments: